"BEETHOVEN, BRAHMS, MAHLER" IS AVAIALBLE FOR PRE-PRDER ON ITUNES 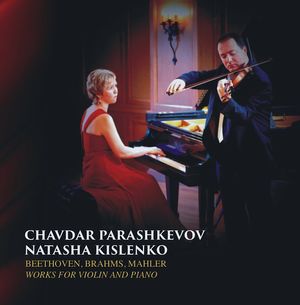 “Beethoven , Brahms, Mahler” is the second studio album by the Violin/Piano duo

Chavdar Parashkevov and Natasha Kislenko. It is set to be released worldwide on May 31,

2018, by Chavdar Music. In this album, following the idea of their first critically acclaimed

Two violin and piano sonatas, Beethoven op.30 no.2 in C minor and Brahms op.78 in G

major, form the core of the album. However, the highlight is Adagietto, an ambiguous but

Otto Wittenbecher). As a bonus the CD concludes with a live recording of Mahler’s Piano

The album was recorded in 2017 in Santa Barbara, CA and later edited and mixed by

cover is taken by Dmitry Rogozhin; thorough and compelling liner notes are written by

The duo is planning to promote the CD with series of concerts in Europe and the USA,

“Parashkevov inhabits every corner of the virtuosi romancing…; His sparkling, brilliant tone and clarity of gesture create wonderful moments of light and shade…”
The Strad


“The attention to phrasing is excellent, and one can feel Parashkevov's bow strokes as they bounce along or attack the high notes with perfect precision.”
Allmusic


“Chavdar Parashkevov is a Bulgarian violinist whose virtuosity is in no doubt...”
MusicWeb